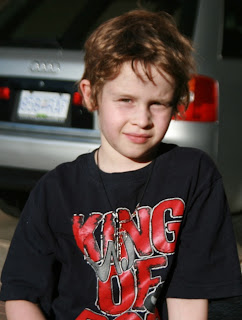 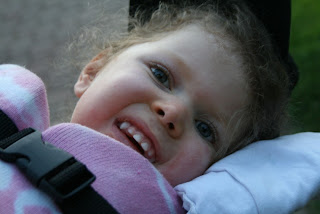 Lately we have all been having a really great time. Shira is changing in leaps and bounds developmentally. Our days are filled with walks, therapy, play dates, beach time, walks in the woods and up the mountain, watching videos, taking walks in the stander. Today was an especially wonderful day. Have you experienced those days when you do a wide variety of activities, unplanned and it was totally effortless? Today was one of those days a day of total synchronicity. After caring for Shira all night and getting little sleep I was surprisingly full of energy this morning. Shira was in a great mood and Sammy was full of beans not wanting to do his home work. It’s not that Sammy is behind in his studies it’s just that we want to keep his mind engaged so that when he returns to school everything will be second nature rather than relearning what he learned last year. Every day Sammy surprises us with what he figures out on his own on the computer or around the house by reading and following directions. I have to say that the only struggle of the day was getting Sammy to sit down and do his math, reading and writing exercises but he did it and the day moved on from there. Sammy attended gymnastics camp today from 1-4pm and he’ll be there all week. Shira and I hung around the house playing, practicing letters and pre reading, singing songs and playing. Maxine was out in the morning working at an assisted living home doing her music therapy with a group of seniors. So it was Sammy, Shira and I at home which can sometimes be challenging but today was a joy. We interviewed a potential employee for nights and tomorrow we will be training her and trying her out for a couple of days to see if she can care for Shira. Our help is really here to support me in shira’s care and I don’t expect any of them to perform any emergency procedures on Shira or even put her on bipap or suction her at night. I have found that while its easy to teach someone how to perform most of Shira’s care I can’t teach them what to do when Shira crashes and this is why I am always close at hand!

The afternoon was wonderful. Maxine spent a few hours with Sammy and Shira singing and playing and then Sam went over to the neighbours behind us to play with their son. I had a nap and Maxine and Shira sang and danced. Shira has really taken to her stander lately more than her power chair. Shira loves to stand up and walk around the neighbourhood in her stander. I’m used to seeing Shira in the device but I’m sure she looks like quite the site coming down the road. I had better wheels and handles put on our stander so we can get out and about in it. It is a little awkward so smooth roads work best with it. Shira loves to be spun in it! We went out for about an hour and a half walk in the stander tonight which is a feat for Shira. Us regular people take standing up for granted but SMA kids have to be braced to stand up and their bodies compress with gravity because of their lack of muscle.

We walked by one of Sam’s friends grandmother’s house from school. The grandmother always takes her grandson to school so Sammy knows her. We rang the door bell and she came out and I told her Sammy wanted to come by and say hello. She held out her arms and Sammy walked up and gave her a great big hug! Then Sammy introduces Shira saying, “this is my sister Shira.” He is so proud to have a sister! I’m so proud of my son. Sammy is such a collected centered person with so much confidence! He has such a big soul. So tomorrow Sammy is going over to her house for a play date with her grandson from 10-12 before he goes to camp.

We then walked over to the park and played there for about 20 minutes because it was getting late. On the way back home from the park Sammy starting begging to be carried on my shoulders but I can’t carry him that way when pushing Shira in her stander because it’s a two handed job. You would think the poor guy was severely injured the way he was walking and begging to be carried and a woman I didn’t know was walking up behind him going I don’t know you and I’m going to chase you which got him moving. She was saying watch out for the crazy lady in the big floppy hat. She seemed decent enough and Sam caught up to me quickly!

About a block from our house a neighbour we met while picking blackberries the other day runs over to us and hands us a plate of home made blackberry tarts which were fantastic! It was late when we got home and I removed Shira from her stander we went into the living room to watch Maxine and Sammy dance free form to some beautiful Israeli singer. Sammy can really move and Maxine and Sammy were taking turns mirroring each other. Maxine has had a lot of training in Dance and it was really beautiful and moving watching her and Sammy dance together. Sammy takes it very seriously and has no inhibitions what so ever. Sam is really into Michael Jackson and the Lion King which he just saw on Broadway in NY a couple of weeks ago. The boy is seriously artistic! After the show we performed Shira’s chest physio, Maxine gave Shira a bath, then bipap and bed and that was our day.
Posted by Unknown at 11:38 PM

Ні theгe would you mind sharing which blog platfoгm you're working with? I'm loοking tо start my own blоg soon but Ι'm having a difficult time selecting between BlogEngine/Wordpress/B2evolution and Drupal. The reason I ask is because your design and style seems different then most blogs and I'm looκing for something unique.
P.S My apologies for being off-topіс but I had to aѕk!


Hегe is my pagе :: buy and sell cars for profit

Ensuring that your diet plan is providing you with the diet you require is extremely important, and teaching yourself on nutrition is essential to accomplishing this. By using the advice you've acquired with this report, you'll be able to be sure that the what you eat is offering you probably the most nutritional value for your money.Selling Real estate Expensive jewelry Or Exceptional Expensive jewelry Parts [url=http://www.x21w12w21.info]Be57u7jder[/url]