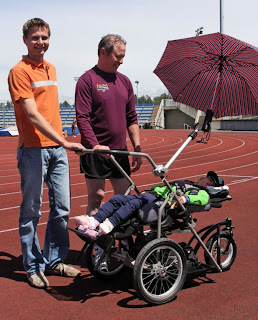 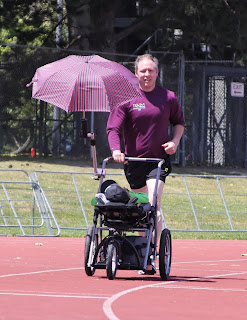 Four-year-old Shira Fisher loves to play, sing, and most of all, go on runs with her dad.

Shira was born with Spinal Muscular Atrophy Type 1, a genetic disease that causes muscle weakness and affects voluntary muscle movements. Her condition requires that she be kept in a supported, reclined position.

Scott (left) with Brad and Shira at the UVic track testing the modified running stroller.

Scott (left) with Brad and Shira at the UVic track testing the modified running stroller.
When Shira was a baby, her father, Brad, would take her for runs in her stroller. She loved these outings and even participated in marathons with Brad. But as Shira outgrew her stroller it became increasingly difficult for the two to continue this activity. Brad even purchased an EASyS running stroller, but it was not meeting their needs.

The EASyS stroller had a fixed front wheel that made turning difficult. The design of its rear suspension made Brad tire quickly. And the tray beneath the stroller, meant to hold Shira's medical equipment, was too low to the ground and would frequently bottom out. Running had become more of a burden than a joy, so they stopped the activity altogether.

Yet Brad still wanted to run with his daughter. After all, running gave Brad some much-needed exercise, a break from his full-time care duties, and an activity to enjoy with Shira. For Shira, having her dad push her around the track was a blast!

A close up of the new pivoting front wheel.

A close up of the new pivoting front wheel.
Scott removed and then completely rebuilt the front structure and wheel, which was making the stroller so difficult to turn. He replaced it with a pivoting wheel taken from a BOB brand stroller. This high-quality unit includes a wheel "lock-in-place" option.

"Brad now has the option of a pivoting wheel, which allows for easy turning, or a straight wheel," Scott explains. "By locking the wheel in place, the stroller is able to remain stable at higher speeds."

Lastly, Scott raised the medical equipment tray several inches so it no longer bottoms out and interrupts Brad and Shira's run.

When Scott delivered the stroller, Shira was ecstatic! She wanted her dad to run with her right away. Brad ran up and down the street to test the stroller with his little girl. It was clear that Shira was in her element; when Brad stopped to chat with Scott, Shira impatiently pleaded "again, again."

Shira was not the only one delighted with the modified stroller.

"Running around the University of Victoria track with Shira was incredibly emotional and brought tears to my eyes," says Brad. "Once again Shira and I are able to enjoy the freedom of running together!"

With the little girl safely nestled in her modified stroller, Brad and Shira are back in training mode and are preparing to run the Victoria marathon this fall.
Posted by Unknown at 10:17 AM

There's certainly a great deal to know about this topic. I like all of the points you have made.

When I initially left a comment I seem to have clicked the -Notify
me when new comments are added- checkbox and from now on whenever a
comment is added I get four emails with the same comment.
Perhaps there is a way you are able to remove me from that service?
Thanks!

My weblog; bathroom in northern virginia