Think For Yourself, Question Authority, Create Your Own Reality! 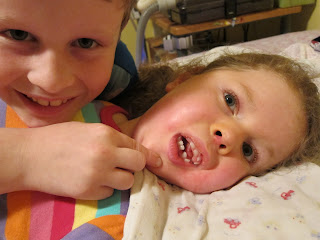 Living with a child that was supposed to have died before the age of 2 is a wild ride. Every day I pinch myself because Shira is here and thriving against all the local doctors expectations. What made my wife and I disbelieve what the doctors were saying to us. Reliving the early journey we took with our daughter diagnosed with a terminal illness went something like this. At 4 months of age after many months of knowing something was wrong with our daughter, seeing 4 doctors and 1 chiropractor, all of them blaming us as knew anxious parents. We were told to take drugs, drink wine, get counselling everything under the sun as help for our daughter except actual help for our daughter. Until I read Dr. Jerome Groopman’s book How Doctors Think I really thought medical doctors really knew what they were doing. It was not clear to my wife and I that biases also crowd doctors minds making them misdiagnose or not diagnose properly like in our situation. Luckily for me my wife has the ability to think way outside the box, research and ask very tough questions in a linear manner as not to offend.

When Shira was finally diagnosed at 4 months of age clinically and then genetically with Spinal Muscular Atrophy type 1 and we were given the horrific statistics of this disease our sister in law informed us there was a doctor who specialized in treating SMA patients. Upon hearing about Dr. John Bach we felt we had to take Shira to see him as there might be hope but Dr. Bach was in New Jersey in the U.S. As my wife made a phone call to Alaska Airlines to make reservations she struck up a conversation with the ticket agent. My wife told the ticket agent we had to get to New Jersey to see a doctor because our daughter was sick and there was a specialist there. The ticket agent asked Maxine if our daughter had SMA. We were blown away. It turns out the ticket agent had a son now living in Denmark that also had a grandson with SMA. The ticket agent kindly gave our phone number to his son. The next day I got a call from Josh Mortenson who told me his entire story about his son’s diagnosis and how the NIV Protocol of Dr. Bach had saved his son’s life from the medical system and all the conventional thought around SMA.

The truth in the words Josh told me, his experience so close to ours and many others spurred us on to seek out what Dr. Bach was doing. The next thing that happened is we joined smasupport which confirmed that our story and experience with the medical system was not unlike every one else’s experience. Everyone else’s experienced also included being told there was nothing they could do, there was no hope, take your child home and love them. But this was not the case.

There are things you can do to help patients whether they are very sick or just have a broken leg. Our kids are very sick and they need a lot of support. I read everything I could voraciously and also compiled and libraried every single bit of data I could find on the treatment and care of SMA patients. I realized early on that all the doctors advising us had absolutely no information on the treatment and care of SMA patients other than end of life care (just let your child die) or tracheostomy and conventional treatment with it.

We realized early on that there were 2 camps of thought in the SMA world and that was 1) There are treatments which can insure your child does not die an untimely death while treatments are being sought.
2) Let your child die.

All of the doctors we ran into before Dr. Bach were of the philosophy “Your child will have no quality of life you should let them go.” Who are these people? Do these doctors have sick children themselves? Do they have children? What are their religious beliefs? How many SMA patients have they worked with on a daily basis? Do they know of any treatments for SMA? Do they know of any doctors that treat SMA patients as a specialty?

We had a lot of questions and the more we asked the less answers there were. So why didn’t people know about the NIV Protocol of Dr. Bach? Why do people just follow what a doctor says to them without questioning?

Is life hell if you have a disabled terminally ill child or is life opened up for you? I was certainly a different person before Shira’s diagnosis letting myself be controlled by people in positions of power believing education, money, position etc. proved they should be listened to. But the reality is these things are fabricated, created. If these people in these positions go home and close the door and stop doing what it is that put them there in the first place those positions would cease to exist.

What doesn’t cease to exist is our child’s disability and what it takes to care for these children. I have had people tell me to let my child die because it will ruin my real estate career. We have had people tell us that our child is a gift from God and God gives you what you can handle. There are many ways to perceive your reality and many ways to deal with one’s own reality. To tell you the truth trying to justify and figure out our reality based on what other people thought started to become very confusing. We realized that no matter how much we struggled with what was happening with us we had to look past ourselves and start to deliver the NIV Protocol to Shira. As Dr. Bach says, “Non intervention in life threatening illness is a self fulfilling prophecy.” We had to get past our pain, our suffering, the words of others, the lack of others experience, the distorted views of others with no experience in these matters and start doing something for Shira.

My father used to tell me all the time, “If you want something done right do it yourself.” Well this was it. Here was Dr. Bach and his 2 published books “Management Of Patients With Neurological Disease” “Non Invasive Ventilation” and our doctors with no experience, no publications nothing. It was obvious what we wanted to do. If we wanted our child to live as long as possible in hopes there is a cure while she is alive then we had to intervene. We couldn’t wait for a system that was so hung up on policy, doctors personal biases, lack of resources, lack of knowledge etc. etc. we had to do something now.

As soon as we got in touch with other parents on smasupport we realized our experience was not our own it was endemic and attached to any disease with a bleak prognosis. Doctors give up when there is no cure. There was a huge chasm between what doctors told us and the reality of what parents were doing and the results we saw. The internet is Shira’s life saver. Because of the internet we were able to seek out doctors that do care, that believed there was a quality of life to be delivered and to be lived. We realized that doctors while being trained basically the same way its how doctors think that make them different and set them apart. Some doctors are totalitarian and its there way or the highway while some doctors give you many choices, help educate you, work with you and support the families wishes and desires. It would be wrong to lay the whole blame for the terrible journey families have to take through a valley of misinformation and horrible support. Many families themselves have serious internal strife among family members which does not allow for an environment of high level care.

So what it all comes down to is perception and the creation of what reality you want and then advocating for it. There is no one reality that has to be adhered to there are choices. We as parents can choose to look at our children and put labels on them like normal, disabled, terminally ill what ever you wish. The label I have chosen is the label human being. Shira is as much a human being as anyone else and we will deliver what she needs to live as good a life as she can the same way we do for our other child and each other. This journey called life has no one way and nothing is guaranteed. We only have our perceptions and biases created by our early socialization of how we were brought up and all the life experiences we have gone through. In the end our perceptions of our reality have to be let go to be able to support another human being. In simpler terms it means, “taking a walk in someone else’s shoes.” Caring for children with Spinal Muscular Atrophy type 1 is an emergency situation. It takes dedication. You have to deliver Multi disciplinary intensive care to your child daily and become adept at doing medical procedures you never thought you would have to do. It’s a choice to do these things. I have watched people put 100 percent of their energy into fundraising and choose to let their children pass. I have watched people choose not to do anything and let nature take it’s course. I have watched parents trache their children. I have watched parents do what we are doing following the NIV Protocol of Dr. Bach. I have seen everything in between.

It’s my hope that by reading what I have written here you will questions authority, gather information, speak with other parents and create your own reality based on perceptions created through experience not solely on other people opinions. The worst opinions we have heard are from those in the medical field while the best information, life saving information has also come from the medical field. As they say in business Caveat Emptor (Buyer Beware). Don’t believe everything you hear and don’t compare yourself with others as it will lead you down the wrong path. Look past yourself and see your child/patient and do what you know is right based on fact not fiction. Research, research, research and speak with lots of parents with children living passed the biases and misinformation of uncaring health practitioners who don’t care.
Posted by Unknown at 8:12 AM

So true! We have to think and work outside the box to create our own reality. Doctors are people too, so if we can make mistakes based on assumptions, they can too.

I love this post. I find that everything you say is true. Many people take what their doctors say at "face value". Professionals are humans too, and can make mistakes. One should always look further, sometimes the answers are quite simple.

"If you want something done right, do it yourself". It is one of those slogans that one must take seriously, especially in our situation. No one will take better care for your child than you. It is the ultimate truth.