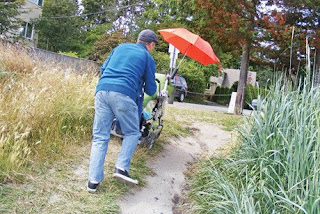 Brad Fisher pants as he heaves his daughter Shira’s specialized stroller-wheelchair up the steep, uneven sand path from Willows Beach.
He enlists the help of caregiver Stephanie Davidson to pull the stroller up backwards, then pushes it the last few feet himself.
Several short stairwells can be found along the length of the beach, but the rough-hewn little trail is the family’s only access down to the sand, where six-year-old Shira, who has the genetic disorder spinal muscular atrophy, loves to play.
Fisher and his daughter have tried out many beaches in the region. Even with its bumpy
path, Willows is the only one that comes close to being friendly to Shira’s specialized wheelchair. It’s also ideal because of the hard-packed sand, rarely found on other shorelines.
Fisher is angry that public beaches are so difficult to access for people with disabilities, and doesn’t think adapting them would be hard.
“They might say ‘well, we could make a ramp there, but what are they going to do when they hit the sand?’” he said.
“You leave (manoeuvring a wheelchair on the beach) up to us, but at least we’ll be able to get down to the sand.”
Tamara Lohner’s daughter, Charlotte, has the same condition as Shira. Even though they live downtown, they usually head to Thetis Lake Park because it is the only lake with stroller-friendly access.
Visits to Willows in the past saw Lohner forced to carry Charlotte and leave the stroller behind.
“It’s hard; she’s like a really heavy, wet noodle,” Lohner said.
Having a full-time job and a son with Down syndrome leaves her little time to worry about beach access. “I just don’t think about it that much.”
There are currently no plans to improve accessibility at Willows Beach, said Oak Bay parks manager Lorne Middleton. He noted a low, sloping path leads to the water at the base of Estevan Avenue.
But Fisher said large logs washed up on the path during the winter, making it a two-person job to hoist Shira’s chair over the logs. Middleton said he wasn’t aware the path was blocked and would address the issue.
The Capital Regional District website (www.crd.bc.ca) lists three beaches with accessible elements: East Sooke Regional Park, Elk/Beaver Lake Park and Island View Beach. Only Beaver Lake has a path leading to the water, and has an accessible fishing float and boat launch.
There is also a ramp leading to the beach near Clover Point.
Many Capital Region municipalities consider accessibility when planning for parks and public spaces.
But it’s hit or miss when it comes to specific guidelines.
The City of Victoria doesn’t have any official policy relating to beach accessibility, said
Todd Stewardson, acting assistant director of parks.
“We’re not discouraging it, but we’re more focused on maintenance of the natural area,” he said.
Beaches are dealt with differently than parks, he said. Many factors come into play when adapting them, such as the specifications for the slope of a ramp and measuring its impact on the surrounding environment.
Saanich parks manager Rae Roer says Gyro Park beach has gentle trails that lead from the parking lot to the sand. He tries to ensure there’s always a clear route to the beach. But he also doesn’t want changes to “sanitize” the beach. “We tend to manage beaches in a fairly natural, wild, West Coast style,” he said.
Joanne Neubauer, president of the Action Committee of People with Disabilities, said improvements don’t have to ruin a beach’s natural charm. “There are so many ways to achieve accessibility that wouldn’t necessarily change the overall atmosphere of the park,” she said.
Many beaches, such as the inlet by Mount Douglas and the stretch along Dallas Road, have steep approaches and would be harder to adapt. But Neubauer, who uses a motorized wheelchair, said there are several that are fairly flat.
“I know there are geographic constraints, but there are other beaches where that’s not the case, and they still haven’t made any effort to make sure everyone can access the beach.”
She suggested a ramp could be cut out of the concrete walkway that runs alongside Willows Beach. “It doesn’t always involve rocket science.”
Posted by Unknown at 1:28 PM