Strength, Courage and The Bear 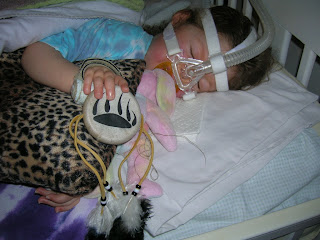 When you care for children with SMA you have as much routine in your day as a soldier does in the military. Today we went awol from our routine a little with Shira sleeping in an extra hour so we missed our morning Chest Physio session. As soon as Shira was ready I asked her if she wanted to go downtown and have another adventure and her answer was a loud Ahhh Ha! We have now mastered the art of travelling alone with Shira placed on her side in her EZon Vest while on bipap. I advise anyone travelling alone with their SMA child to travel this way as it helps prevent desat situations as well as managing secretions. We arrived downtown parked unloaded etc. which is a chore in itself when you are alone. Amy my hat goes off to you for the years you spent caring for Lily on your own and thank you for teaching me so many valuable skills!!!! Shira loves to walk through stores especially the stores playing funky loud music. It took Shira and I about an hour to walk a mile because we stopped at every street musician so Shira could sing with them. Yes you heard me. Shira has a microphone and speaker so people can hear her speak because her voice is so low in volume. Now Shira is heard very well and she can also hear herself better. Shira has an excellent ear and can match pitch very well with most melodies. So the street musicians got a kick out of Shira humming along with them. I would put a couple of quarters in Shira’s hand and wheel her over to their guitar case and hang her hand over it and she would work very hard to drop the quarters into the case. We worked our way through downtown to the waterfront where there are more street musicians and lots of artists of all kinds. At the end of the row of artists is an embankment where all the First Nations people sit making arts and crafts. Shira loves to with everyone. She is so cute. She loves to say, “Hello, nice to meet you!” It just makes people melt. We walked the line of all the First Nations Artists and one of them a big burly man with hands the size of warn baseball gloves looks deeply at Shira and says, “take the small bear drum there I want her to have it.” Then he says to her, “You need strength and courage little one. The bear will bring you strength and courage.” And he says to me, “She will play the drum for both of you, you need strength and courage too.” Man it brought me to tears. I shook the mans hand and we walked on. As the Oglala Sioux would say charging into battle to count coup, Hoka Hay! My heart was soaring. This man connected deeply with Shira, he could see, no words needed to be spoken between us for understanding. After our spiritual encounter Shira and I headed off towards my mother’s house. On the way we stopped and played with the huge draft horses that pull carriages full of tourists. We only stayed long enough at my mother’s to say hello and take a bag of carrots from her to feed the horses on the way back to our car. While feeding the horses the owner came up to me and basically mistook Shira for Charlotte Hodgson who lives in that area and is often feeding the same horse with her mom Tamara. SMA children have many of the same physical traits and Shira is often mistaken for Charlotte when we are in their neck of the woods. After feeding the horses our bag of carrots and sharing our carrots with another little girl that was there so she could also feed the horse Shira and I headed back to the car. So now not only did we miss our physio session in the morning but we were way past Shira’s respirator break, bad dad!! We got back to the car and I put Shira on bipap and she relaxed and breathed easy all the way home. When we got home and moved all the gear inside I placed Shira back on bipap, I drank a gallon of water and looked in the mirror only to notice that I had a sunburned face that started half way down my forehead because I was wearing a hat. Another adventurous day with Shira!!
Posted by Unknown at 12:27 AM

man Brad what a great story, Im fighting back the tears over the bear drum, oh nope they just one. Awesome just awesome Sheila

That may be the sweetest blog post I have ever read.

He told her that the watch would stay with her until he came back. The sound of the watch was his fine-sounding words. He promised he would come back and marry her.[url=http://www.sunglassescool.com/montblanc-sunglasses.html]Mont blanc Sunglasses[/url]
Rolex watches are amazing. A gorgeous Rolex watch looks great and stylish. As we all know that Rolex watches are known for its strength and endurance, that's why Rolex watches have a good reputation for so many years. And also you will see the quality and precision reflected in each Rolex watch. So, Rolex is a name that thousands of people had dreamed of.