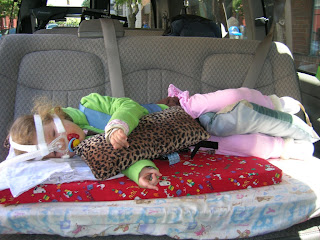 The last few weeks have been tough. Sammy was endlessly sick the last part of the winter and now Maxine is very sick. Maxine went in to have swabs and tests done so we will hear on Monday if she has anything nasty. Today was a reprieve for Shira and I that have lived in our basement way too long this winter. A Channel news that helped us in the beginning by putting pressure on the Health Minister and Doctors here called us to come down and speak at a rally. The rally was for the television that was trying to make a point as to how important the news was beyond entertainment. Canadian television companies are not doing well these days because of the slow down in the economy and they are fighting with the cable service providers that charge them a fortune to carry their signal. Long story short Maxine and Sammy did not come with us because they are sick. So Shira and I went for our first solo car ride. We followed Lily Barnett’s car travel protocol by laying Shira on her side and traveling while on bipap. Usually I only travel with another person so that Shira can be suctioned but this time we had to go solo. Everything worked out without a hitch and all the way there and back Shira kept saying, “I’m having fun daddy!” “I’m ok daddy!” She was so funny! When we got to the event I was surprised to see the street blocked off, a jazz band playing, food, mascots etc. The journalist that has helped us out many times greeted us as well as the anchor. I thought I was just going to be interviewed and it would be on the air but it turned out that I was to speak in front of 250 people. Shira was great and had a lot of patience while I spoke. When I was done Shira just wanted to watch the band play. After about an hour Shira said, “Daddy walk around.” So we left the event and walked around downtown. We went to the Gap where Shira picked out an outfit (Gap Girl athletic lime green jacket and pink pants) and then we walked around downtown. We stopped to listen to a guy playing guitar on the street and Shira sang along with him using her microphone and speaker. After about an hour of walking around and talking to people Shira and I headed back home. The ride was un eventful and fun all the way home. When we got home Shira rested for about 2 hours on bipap and then we headed out to watch baseball until 9 at night. Sammy came with us which is not usual as he hates to walk but he did tonight. Of course when we got to the game Sammy just wanted to leave and he hounded me the entire time for pop which I wouldn’t buy for him. On the way home Sammy wanted me to carry him on my shoulders of which I refused so he started telling me he was going to have a heart attack he was so tired. I didn’t give in and carry him this time and we had a race for part of the way back, stopped at a park to play for a and chatted up a storm. 6 year olds are hilarious. We talked about a wide range of subjects from brain damage, how clouds are made, why people of color aren’t as famous as white people (then he remembered about Barack Obama), who the most famous person in the world was, why the giant boulder he climbed on was hot, why the two men that walked by us were different shades of brown, why we can’t take flowers out of peoples yards and on and on and on. Now Shira is on bipap and tucked away in bed and I’m writing this. It was a good day!!
Posted by Unknown at 11:52 PM

Hi Brad, This is Jennifer, Jocelyn Lee's mom. It has been a while. Hope all is well. I just came across a picture of Shira laying in the car. If you don't mind me asking what is it that you have her laying on? It looks much more comfortable then our set up. And about the bipap in the car. Do you have more than one battery or does a 32 amp hour battery do bipap and cough machine if needed? I am always worried that the battery may die??? Thanks for you help
Jennifer
www.jocelynpaigelee.org