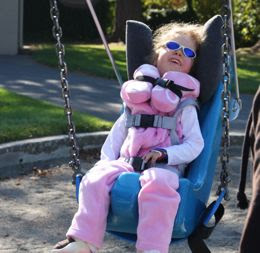 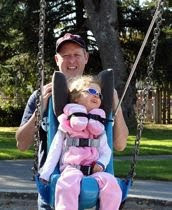 Shira Fisher loves the thrill that comes from soaring through the air on a swing.


The four-year-old girl first tasted the freedom of swinging when her dad rigged a special swing for her in the backyard of their Victoria-area home. But because Shira has Spinal Muscular Atrophy, a genetic disorder that has severely affected her muscular development, she has never been able to swing anywhere else.

Shira longed to be able to swing alongside other children at some of the numerous parks in her neighborhood. While there are swings on the market for children with disabilities, none worked for Shira and could be attached and removed from a standard park swing.

"Shira's father, Brad, had an idea of what he wanted," recalls Brandon Fry, an engineering co-op student at CanAssist who was assigned to work on the request. "He already had a supportive seat designed for kids with special needs. He asked us to modify it so it could be attached easily to any park swing."

Brandon attached a seatbelt-like system to the back of the store-bought Tumble Form Chair. The chair's firm foam material safely supports a child in a reclined position, an important consideration for Shira. Then Brandon added a metal back support with two metal rods that link at both ends to a swing's two chains.

When Shira and Brad met CanAssist staff at a local park, Shira was so anxious to begin swinging that she was almost in tears. Being four, patience is not a readily available virtue at this point. But once Brandon buckled her into the new device, Shira was humming softly and smiling brightly.

"She wanted to get on it pretty quickly," says Brandon. "And once she was in, she wanted to go higher and higher."

Apparently Shira is a real adventurer, much to the chagrin of her protective dad.

Shira stayed and swung while the CanAssist crew packed up to go. Finally able to swing just like other kids, she didn't want her first adventure in the park to end too soon.


Brandon ensures the seat
attaches securely to the swing. Shira's father, Brad, gives
Shira a push.
Posted by Unknown at 11:10 AM

Basicly I have herd that when you download the latest iPhone software it keeps all the old ones (therefore wasting space) so i am trying to locate them on my mac to delete the last few, do you know where/how i can find them?
[url=http://forexrobot-review.info]best forex software[/url] [url=http://www.affiliateadsforum.com/viewtopic.php?f=2&t=26646&p=69005#p69005]unlock iphone[/url]

Howdy i am fresh to this. I hit upon this message board I find It extremely accommodating & it has helped me loads. I should be able to give something back & aid other users like it has helped me.

Cheers all, See You Later.

Whats's Up i am new here. I came accross this message board I have found It incredibly accommodating & its helped me a lot. I hope to give something back and support other people like its helped me.

Cheers, See You Around