Our Children. Our Gifts. 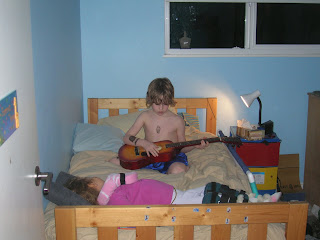 A new consciousness has permeated our household. Yesterday I changed Shira’s schedule. Shira used to go to bed at 10PM and wake around 9 A.M. and by the time she got off her respirator and all her physio was completed it would be around noon. I moved Shira’s schedule back by waking her at 7 or 7:30 A.M. Now Shira is waking at the same time as our 7 year old son Sammy and going to bed at the same time as he does. Shira feels so much older now that she is doing this. When it’s time for them to go to bed and we call out, “Ok kids it’s time for bed let’s get ready” you can see the joy in both of their faces. They are brother and sister, as one! The best thing about this time change is that it allows Shira and Sammy to spend much more time together. Shira used to be taking her Bipap (respirator) break the same time Sammy would get home from his after school activities which meant he had to be quite and I was unavailable because I was with Shira. Now Shira is finished with her bipap break by the time Sammy arrives home which means we can all play together.

Shira’s bath time is now at 5ish vs. 9 P.M which means Sammy can take part. I haven’t been in water with Sammy for quite some time but he really wanted to climb into the bath with us this evening. It was so beautiful and heart breaking to watch Sammy gently wash his sister and rinse her off. I washed Shira’s hair and Sammy rinsed her hair. Shira thought it was all quite amusing especially when I accidently raised her feet kicking Sammy in the head with Shira’s feet and being the little actor guy he is he sank under water. If you could only hear Shira’s laugh it is so gentle and sweet.

After the bath we continued playing in the living room. Shira was having a blast with her new Lion King Action set I found on Ebay for her. Sammy also loves it and wants one (the concept of sharing is a hard one to learn). The Lion King has taken over the household. Shira refers to me as Mufasa and I have to call her Simba; this goes on most of the day. The kids played for an hour and a half together with hardly any supervision accept for suctioning and position changes for Shira. Maxine and I sat in the kitchen just listening to them. Sam is such an amazing little boy. He is only 7 and he looks after his sister. He makes sure she has a toy in her hand, is comfortable, able to see everything he is doing and they talk sing, play make believe and interact deeply. Sammy is full of hugs and kisses for his sister and it just moves us so deeply to watch him and his gentleness.

At the end of play time it was fun to watch them argue over who gets to be Paul Stanley from Kiss. They ended their time together by watching some KISS videos on youtube. Shira has quite the will, she just does not give in to Sammy.

It took us so long to get to this place where our lives seem to be somewhat regular. More and more we witness our children playing effortlessly, without the boundaries of a life threatening disability and we wonder is this really happening to our family? They sound so “normal.” Without physically being in the same room with Shira you would never know she was as sick as she is except for her speech.

Every day Shira wakes up that day of life is a gift and every day we have Shira in our presence we are granted our greatest wish. I can only imagine what kind of man our son is going to grow up to be. I see this young boy love so deeply, strive for ways to understand her, touch and hold his sister so gently, communicate so deeply and all with no fear.

I know I don’t talk about our son as much as our daughter but I say it now, “We love you Sammy; you are amazing!”
Posted by Unknown at 11:44 PM