Death, not disability, is the end of the world 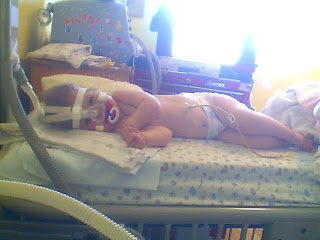 I've been up since 5:30 this morning because the roof on our back porch has almost been torn off by the high winds here. In between going outside in the freezing cold and placing 10 lb weights on the roof to hold it down I've been doing a little research into quality of life and came upon this article. I have to say after I saw Million Dollar Baby I was left with a bad taste in my mouth. Because the movie was so well received without any critic about disability and quality of life shows what the general public thinks about the disabled. It's the old NIMBY or Not In My Back Yard approach to life. If I don't see it it's not my problem. Well we were a normal family before our daughter was born with a life threatening disability so I guess now were not normal. But as Groucho Marx said, "I don't want to join any club that would have me as a member!"

Death, not disability, is the end of the world
CBC News Viewpoint | February 03, 2005 | More from Disability Matters

This column will feature three writers, each with a different disability. They all have something to say about living with a disability and how they view awareness and attitudes toward disabilities in Canada. The column will deal with the rights of people with disabilities, eliminating inequality and discrimination, and issues of self-help and consumer advocacy. Our plan is to rotate among our columnists to have a new column each month.
Ed Smith Ed Smith is a retired educator and full-time writer. His humour column runs in several papers and magazines and he has had eight books published. He has been quadriplegic since 1998. Ed lives in Springdale, Nfld.


Clint Eastwood just lost me as a fan, something I'm sure will keep him awake nights.

His latest movie, Million Dollar Baby, has won praise from everyone who's seen it, and perhaps a few who haven't. As a person with quadriplegia I see it as nothing more or less than a scurrilous attack on people with spinal cord injury specifically, and those with disabilities generally.

A couple of years ago I gave a keynote presentation to a conference on disabilities. It was meant to be an upbeat and "go get 'em" type speech and from the standing ovation at the end it seemed I had succeeded admirably. Less than an hour later one of the delegates to the conference (we'll call him Jack) button-holed me in the hotel lobby. He looked me up and down and then spoke in confidential tones.

"When I see you now," he said, "and remember what you used to be like, I think 'twould be better if you were dead."

Jack and Clint would have hit it off well. Million Dollar Baby, which Eastwood both directs and stars in, is the story of a fight manager with a promising young boxer. The fighter gets a spinal cord injury in a fall and at her request the manager (Eastwood) kills her as she lies in a nursing home. The film will likely win all kinds of awards.

Not from me, even if I had them to give. Eastwood has hardly been a friend of people with disabilities. He was sued in 1997 for refusing to include $7,000 worth of accessible bathrooms in his $6.7-million resort renovations. Caring chap, Clint.

So it's what the boxer wanted, right? It's what I wanted, too, when I discovered I was paralysed in almost 90 per cent of my body. I pleaded with my wife to have me shot or put down in some merciful fashion. At the time, I didn't even care if it was merciful. That was for the first two days. Now, six years later, I'm rather glad she didn't.

Actor Christopher Reeve had a similar experience. So did many people I know who have suffered from catastrophic injury.

Incredibly, a preponderance of the population, even in our "enlightened" Canadian society, agrees with Jack that we're better off dead.

Some years ago I did a short editorial segment for CBC radio in which I defended Robert Latimer's second-degree murder conviction for having taken the life of his multiple handicapped daughter Tracy. I disagreed strongly with those who wanted him pardoned and set free. The producers told me later that calls and e-mails were running five to one against my position.

It's no fun being quadriplegic. We have to battle attitudes that believe us to be incapable of speaking for ourselves, unworthy of any accommodation of our physical needs, and something less than "normal." We wait in the snow or the rain outside hotel and restaurant doors that don't have automatic openers, hoping some kindly soul will see us and come running before we perish. We endure while waitresses and store clerks talk over our heads to our spouses or caregivers about what kind of pie or size shirt we want.

We get stuck in cubbyholes in the back of theatres and movie houses. I have almost been physically attacked while asking an able-bodied motorist to remove his vehicle from a handicap parking space so we could get close to an entrance.

While I was in a rehabilitation centre in Toronto my wife called several churches to see if they were accessible. Perhaps we chose the wrong churches or the wrong denominations or the wrong religions. She didn't find one that wouldn't have put me at the front of the church to be stared at, or in the middle of an aisle to be an obstruction.

Despite all this, the vast majority of spinal cord injured persons have a good quality of life. We have family and friends, hobbies and pursuits, occupations and pleasures. Life has changed irrevocably, but it has not become a hell so tormenting that we'd be better off dead. On good days it's downright bearable!

Million Dollar Baby sees no opportunity for any quality of life with spinal cord injury. Its premise is that unless you can walk and/or use your hands your life has no value.

I know several people with quadriplegia who swear up and down that they are really happy. Some of them have even said they're glad they had the accident because it changed their lives for the better. A friend who is also quadriplegic assured me not long ago that he didn't have a complaint in the world.

Although we all admired Christopher Reeve for many reasons, some of us had problems with his obsession that the only goal in life worth pursuing is to walk again. That just isn't going to happen for many of us so we get on with the task of making a contribution to our community in whatever way we can, and being as happy as the next person while doing it.

Being physically disabled is no picnic, God knows. But, Clint and Jack, it isn't the end of the world.
Posted by Unknown at 6:26 AM