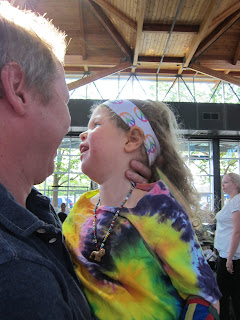 Shira is now 5 years old and believe it or not she has only seen her mom perform in public 2 times. The reason for this is we keep Shira away from social gatherings. 90% of children with SMA Type 1 are dead by the age of 2. These statistics are based on no intervention and high levels of exposure to other people which lead to death through disease. Shira has had relatively few hospitalizations because of our disease protocol (can be viewed here http://www.asonginthisworld.com/images/client_pics/DISEASE%20PREVENTION%20FOR%20OUR%20HOME.pdf

But being summer and cold and flu season slower this time of year (but not totally gone you still need to be vigilant)we took Shira to the mall to watch Maxine perform her children's show Let's Make Music And Move. Here is the video: http://www.youtube.com/watch?v=pXkxtvJdke8 Shira absolutely loves watching her mom up there and all the children reacting to her. Shira also loves singing and performing herself and really wants to get up on stage and sing which we might do next time.

As you can see Shira has a little glass bead neckless with a lion bead on it. We were at a Pow Wow last 2 weeks ago and Shira chose the beads and the whole family pitched in and helped her make it. Sammy also made a wonderful bone bead neckless with beads he bought there.

Shira is really doing great and has so many interests like regular kids. She just needs more support when doing things. Today we are off to an Indian Festival downtown. Shira and Sammy are both excited to dress up in their authentic Indian clothing from India and going to the festival. d
Posted by Unknown at 7:29 AM

This is very fine web site, thank you and look at that [url=http;//ciufcia.pl]gry dla dzieci[/url]

Great post, I am almost 100% in agreement with you

Thanks for the auspicious writeup. It in truth was a
entertainment account it. Glance complicated to far introduced agreeable from you!
However, how can we keep in touch?

Here is my homepage "stearic acid"

Admiring the hard work you put into your website and in depth information you
offer. It's great to come across a blog every once in a while that isn't the same unwanted rehashed
information. Fantastic read! I've saved your site and I'm adding your RSS feeds to my Google account.