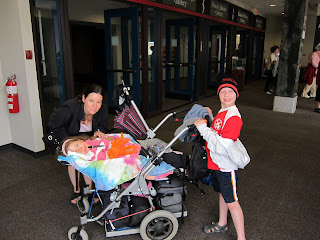 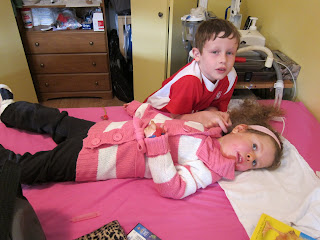 I don’t know where to start as we have been having so much fun. Sammy has been in many different camps this summer. Besides the camp he has been going to since he was 4 years old the Victoria Conservatory Musical theatre camp was a big highlight for Sammy and for Shira. As many of you well know I am a huge advocate for staying away from social gatherings of any kind with Shira. Whenever you are around more than your own family your chance of infecting Shira with something goes up exponentially. Being summer and knowing how slow our local pediatric intensive care unit is we decided to take Shira to Sammy’s recital. Sammy had been practicing the songs from Annie for many days so of course Shira also learned them. Where ever we go Sammy and Shira sing It’s A Hard Knock Life and The Sun Will Come Out in unison. It’s the cutest thing you’ve ever heard and seen. I was walking down the street the other evening with Sammy and Shira in her stroller. The streets were very quite and you could here their voices ringing out singing It’s A Hard Knock Life. Shira in her stander certainly makes those words ring a little true except for the fact we don’t torture her at home like Ms. Hanagon. Anyways Shira was blown away by the beautiful stage and of course the recital. Shira screamed when the young girl playing Ms. Hanagon appeared on stage. It was an amazing production and Sammy was the only boy to get a part out of the chorus. Sammy played the policeman chasing down Annie and he did a great job!

Yesterday we took Shira to her first movie and it was an IMAX movie no less. The movie opened up with a 6 story Orca Whale jumping at us. The movie was about whales and it was absolutely beautiful of course. Most of the scenes were from South America and it just made me want to get on a plane. Shira absolutely loved it and she kept singing Aerial’s little theme song from The Little Mermaid all the way through the movie. When the movie finished Shira said, “Yeah!” After the show we walked through the whole B.C. museum which she also enjoyed.

On Thursday I took Shira to Sammy’s outdoor camp but I have to say it was not all that exciting and I signed Sammy out and Shira, Sammy and I took off together. We made a trip to Shira’s school www.sides.ca to see if anyone would be there. Shira will be attending Kindergarten this year at home but the school will be sending a teacher to our home. I of course took Shira and Sammy to the wrong campus and I guess they called where we were supposed to go because when we got there they were all waiting for us. Shira kept saying, “I’m so excited, I’m so excited!” The whole staff was so welcoming and loving towards Shira it was a beautiful thing. It was really like someone was on our side, really understood Shira and could see how much potential she has. While we were at the school Sammy felt the need to push Shira in her wheel chair. Sammy is so proud to know his sister is going to school. The staff really treated Sammy well and really understand the dynamics between siblings and the role they play in the family unit with a child with challenges. We had the greatest time and it was very energizing to be there.

Today we are off to the Johnson Street Market then maybe a visit with the goats at Beacon Hill Farm.
Posted by Unknown at 8:31 AM