Tonight Shira said, "I have SMA. I want to be grown up!" 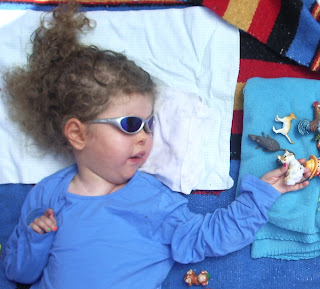 I'm not sure but I think Shira is thinking when she is grown up she will be able to walk and be like everyone else. Now i'm thinking how do I deal with these questions. I've just started searching for answers to these questions and found this article on www.fsma.org web site:

How do I explain SMA to my young child?

Dear Parent,
You asked how to tell your son about his SMA without damaging his soul. I am 26 years old and have SMA. As I recall, my parents were a lot sadder about my disability than I ever was as a child. Under no circumstances did I want my parents to be sad about me, and I still don't. Your son probably does not want you to be sad about him either.

As far as what to tell him, I think it is generally best to answer his questions as he asks them, not before. At his age, I remember I wanted to know what the reason was that I could not walk, and by that I mean I wanted to know what the malfunction of my body was, but everybody usually gave a sermon every time I asked. It took a long time for me to get the answer I was looking for, that my nerves (which were like phone lines) were not able to get enough messages from my brain to my muscles, and so all of my muscles were very weak because they didn't get my brain's messages enough. So listen carefully to what your son asks and don't make his questions bigger than they really are. You say you are worried how to tell him that he won't walk again. It is possible that he doesn't believe he will walk again and just wants to know whether or not he will. I would tell him that he will probably not walk again, and then ask him how that makes him feel. Talking to him about how he feels, however he feels, is more important than trying not be optimistic in telling him the news. Your son will react how he will react. All you can do is be there to support him through his reaction.

He probably will ask you himself whether or not his illness is life threatening. If he ever watches the MDA telethon, gets hospitalized with a bad pneumonia, or meets others with neuro-muscular disease, trust me, he will one day ask you if he is going to die young. You must tell him the truth, which is that some people with SMA die young and others do not. Whether or not he dies young is up to how healthy he tries to be and up to whatever God has in mind for him. Tell him this is true for all people, not just people with SMA. Tell him that his job on earth is to live as fully as he can, not to wait around for death. And then ask how he feels. If he feels scared or sad, let him know how you feel when you think about dying young. It's a difficult idea for everyone, after all.

I would recommend you introduce your son to Stephen Hawkings' movie, A Brief History of Time (not the book - it's incomprehensible) when he's a little older. Stephen Hawkings has ALS, a neuromuscular disease that it almost always fatal. Stephen has lived more than 20 years longer than predicted, and his doctors are forever saying that he only has a little more time left. He is married, has kids and has made a huge contribution to the world through his work. He's a good role model for children who are worried about the life implications of ALS, not because he has survived, but because he lives the life he has.

Brad, I also read this article at the time Jojo began asking these tough questions at about 4 years old, and it really helped me. Jojo's "questioning" began like this, " I wish I were 5 so I can walk, " or "I wish I'm longer (taller) so I can walk." I'm not really sure yet if he has accepted the fact that he probably won't ever walk. I though feel that he thinks that in the future, he will be able to do things like non-afflicted people do, just because of all the things he wants to be when he grows up: a rock star, a veterinarian, a special agent, a race car driver, etc. It's tough. Please give Shira a big hug from us. And one for her awesome brother, too.

Ive read this article too, but for what ever reason I think Sky has excepted his life and limitations, when put into a stander he would get so mad, so I would ask "dont you want to stand up like mama and daddy?" he would say "Skylar dosent need to" for now he is happy with his life and with what he can do, and to be honest with what he cant do. I will cross the bridges when the time comes for more answers, until then Im going to keep him happy in the life he lives, and keep praying for a cure. Id love to see him marry one day, become a football player or race car driver. Also I guess Ive always told him how special God made him, and how perfect he is, maybe he feels that in its self is enough. I dont know, Big Hugs to Shira and to you, questions or statements like that are hard, we want to encourage our kids!